Please wait while the audio tracks are being loaded.

It appears there are not any audio playlists available to play.

The track url currently being played either does not exist or is not linked correctly.

Update your browser to a recent version or update your Flash plugin.

August 6, 2014 would have been Elliott Smith’s 45th birthday. We’ll be inviting special guests to join us throughout the set, playing a handful of his songs to pay tribute. Guests include Alec Spiegelman (of Cuddle Magic) and Louis Schefano (of Lou-is).

This is the first night of a four week residency. Come visit us at Pete’s every Wednesday night in August 2014!! 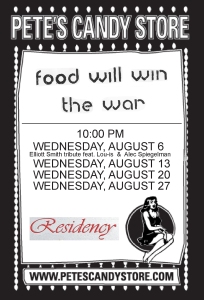 No incoming links found yet.